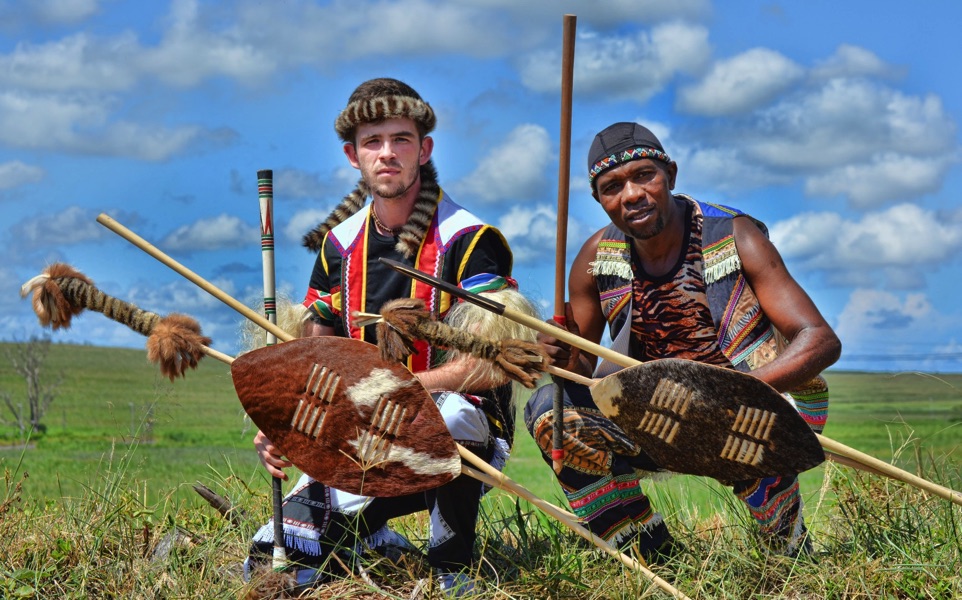 Hailing from Empangeni in the heart of Zululand, Qadasi and Maqhinga are a SAMA award-winning duo on a quest to revive the powerful sounds of traditional Maskandi music. Both professional musicians in their own right and sharing the same vision, joining forces has resulted in an international caliber of music which represents the heart and soul of South African roots music.

David Jenkins, also known as Qadasi, is an accomplished Maskandi guitarist, concertina, banjo player and vocalist who developed a deep passion for Zulu culture and music at a young age while travelling through Zululand with his late father who was a journalist.

This interest grew exponentially over the years, and as a result, his love for traditional music was born.

Maqhinga Radebe’s career launched in the mid 90’s after being given the opportunity to tour the USA with Ladysmith Black Mambazo as part of the stage play, Nomathemba.

On his return to South Africa, Maqhinga formed the group, Shabalala Rhythm, alongside Sibongiseni and Thamsanqa Shabalala. Thanks to the subsequent popularity of the group, Maqhinga’s talent was brought to the spotlight, making him a prominent and highly respected artist in the Maskandi industry.

With five solo albums under his name, Maqhinga has received numerous awards for his amazing musical skills, which also include SAMA and SATMA Award nominations.

Well travelled, he has performed to audiences around the world and has shared stages with a number of highly acclaimed artists such as Hugh Masekela, Oliver Mtukudzi and Soul Brothers, to name a few.

David first met Maqhinga in Durban in 2010 when enquiring about a concertina tuner. After a ‘jam session’, thus began their story and the two have become firm friends, with Maqhinga taking the role of music director and producer of David’s first solo projects.

The talented musicians later decided to join forces after realizing the musical potential that was possible by combining their artistry.

Over the past several years, the two of them have travelled home and abroad with their eclectic fusion, taking it to audiences in the UK, Europe, Asia, and throughout South Africa. In 2016 they released their debut collaborative album titled, Lashis’ Ilanga, which was later nominated for a 2017 SAMA Award for Best Traditional Album.

After teaming up with their full band, in December 2019 Qadasi and Maqhinga released their long awaited sophomore album titled, Ungabanaki, which recently won a 2020 SAMA Award for Best Traditional Album.

Aside from promoting Zulu culture, traditional music and social cohesion, the duo have also been actively involved in rhino conservation, working alongside the Kingsley Holgate foundation and Project Rhino KZN as rhino ambassadors.

There is much excitement in the promise of what lies ahead for this Maskandi duo which is continuing in the footsteps of this powerful genre’s icons.